Thanks!
We will contact you.
EnRu中文
‘Year of rail 2021 much needed and perfectly timed’

Share
Share
Email Facebook Twitter Vkontakte
Copy link
Various railway organisations have welcomed the proposal of the European Commission to designate 2021 as the European Year of Rail. They believe that it should serve as an opportunity to deliver a much-needed legal framework that meets the needs of rail freight.

UIC welcomes the recent announcement celebrating 2021 as the «European Year of Rail». «This EU initiative will allow all the actors of the sector to demonstrate the advantages of rail», the overarching railway group said. Likewise, lobby organisation ERFA celebrated the proposal, saying it is well aligned with the European Commissions proposed Climate Law.

Also combined transport group UIRR linked the Year of Rail with the Climate Law, encouraging the European Parliament and the governments of the Member States in the European Council to enact both. The Climate Law proposes setting a binding target of reaching net-zero carbon by 2050. It is impossible to achieve this objective if transport emissions are not addressed, is the general belief.

In 2017, 27 per cent of all greenhouse gas emissions came from transport. Railways accounted for 0.5 per cent of these emissions. Thus, it represents the best means by which to bring EU transport emissions under control, the parties agree. A significant modal shift is therefore essential.

«Combined transport is the technique by which very low emission electric rail, as well as waterborne modes can be most efficiently inserted into longer distance freight transport chains. Subsequently, it will have to play a major role to achieve the climate neutrality of surface freight transport in the European Union», UIRR commented.

Conor Feighan, ERFA Secretary General, added: "The proposed European Year of Rail is well timed given that 2021 will be an important moment for the future of rail freight. 2021 will see the tabling of some key legal texts, such as the revision of the Rail Freight Corridors Regulation, which will play a pivotal role in determining whether rail freight can reach its true potential. 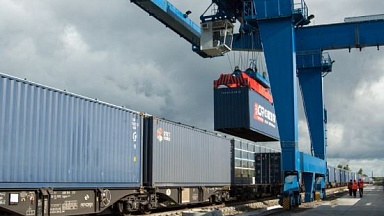 Overview
Impact of Russian Embargo on Trade Flows Structure from European Union to Asian Countries
Analysis of international trade statistics shows that different groups of the European Union (EU) member countries reacted differently to a ban on imports of certain types of food products (hereinafter referred to as «sanctioned goods») by Russia in August 2014, which also implies a ban on transit traffic.
Source: ERAI
Freight nomenclature Rail transportation Transit traffic China EU
Article
Development of transit potential in conditions of integration of the Republic of Kazakhstan into the world transport system
The article considers the current state of the transport infrastructure of the Republic of Kazakhstan, its integration into the international network, and also notes the further development of the transport and logistics infrastructure as a catalyst for the economy.
Source: Procedia Computer Science Journal
Rail transportation Transit traffic Transit potential Transport corridors Kazakhstan