The logistics segment confronts an onslaught of startup

New technologies are targeting a variety of logistics services, including automated scheduling, the consolidation of deliveries from multiple shippers, ondemand trucking and carrierbased data analytics. One technology that is relatively nascent yet holds meaningful potential for transport and logistics is blockchain. Often the precise location of shipments that are en route is unclear, which makes it virtually impossible to optimally schedule deliveries or provide guaranteed specific delivery times. Moreover, dozens of documents accompany most shipments and if a single bit of paperwork is missing, a shipment can be delayed for days. Blockchain has the potential to eliminate most of these roadblocks because it can serve as an encrypted digital ledger tracking the movements of products from warehouse to customer and linking documentation directly to the shipment as it makes its way to the destination. Among Transport and Logistic (T&L) companies, interest in blockchain is growing, although usage is still lagging. In early 2018 IBM and A.P. Møller-Maersk announced a joint venture, TradeLens, to develop a blockchainbased platform for the T&L ecosystem. In late 2018, a rival initiative called Global Shipping Business Network debuted, with nine ocean carriers and terminal operators in its consortium. Partnerships or alliances linking startups with innovative technology ideas and established T&L firms may become more routine in the future. But these sentiments are not yet resulting in much M&A or joint venture activity among technology firms and incumbent T&L businesses, and virtually none among direct competitors in the industry. Indeed, only 37% of survey respondents anticipated entering into a strategic alliance or joint venture of any sort, and a mere 26% said they expect to collaborate with entrepreneurs or startups. 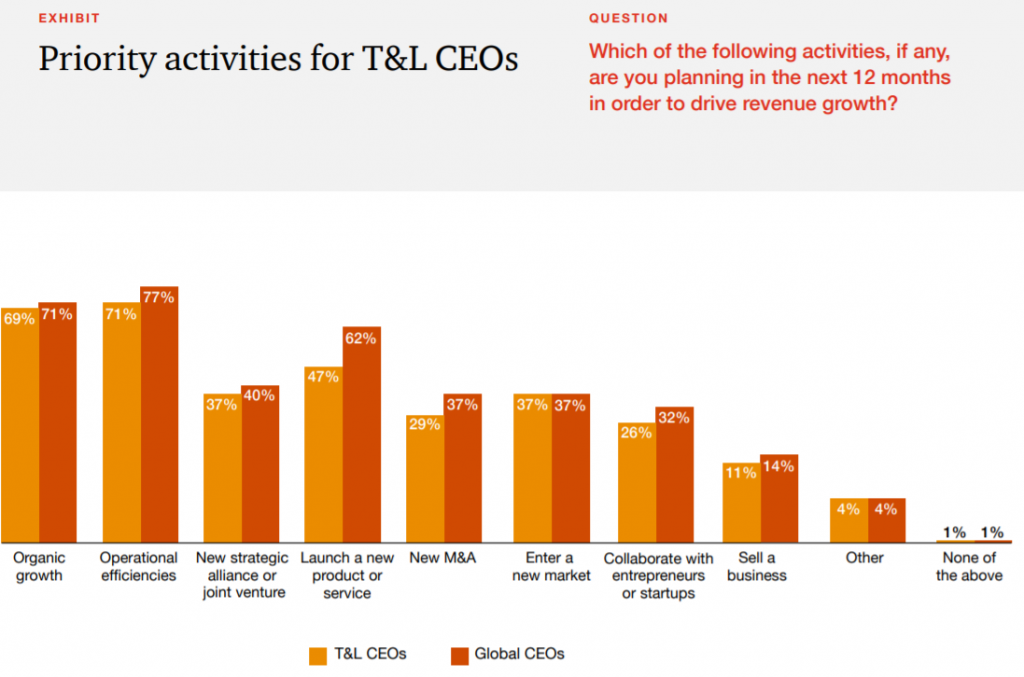 T&L companies should also consider the use of artificial intelligence (AI). For instance, fleet management could be greatly improved by the use of sensors inside trucks, ships and airplanes connected to AI programmes that monitor fuel consumption and recommend ways to minimise oil and gas usage, as well as programmes that suggest proactive maintenance activities before expensive and time-wasting major breakdowns occur. In PwC’s CEO Survey, 40% of T&L respondents said they had no plans to pursue any AI projects, compared with only 23% of CEOs from all major industries.

The research firm Tractica forecasts that worldwide shipments of warehousing and logistics robots will grow from approximately 194,000 units in 2018 to 938,000 units in 2022. Japan’s SoftBank Vision Fund has invested nearly US$1bn in Nuro, a startup that makes selfdriving vehicles for local shipments and is already experimenting with delivering groceries in Scottsdale, Arizona. And Amazon pioneered the testing of drones for last-mile delivery in 2016 — since then, the idea has captured the imagination of other T&L companies.

The T&L business is generally not known for its technological agility or its propensity for rapid reinvention. Companies today shouldn’t grow too comfortable with that old familiar way of doing business. 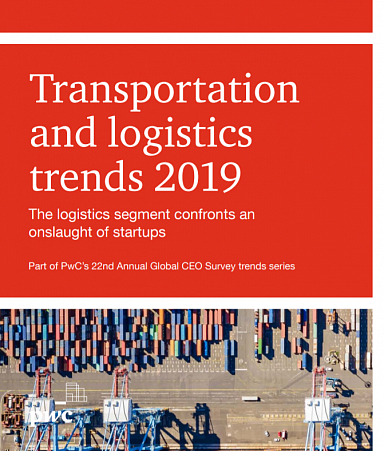 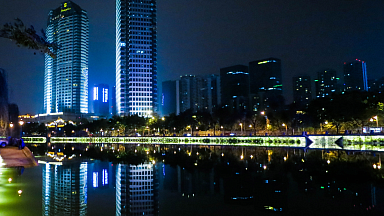