The latest UK service from Xi’an to the port of Immingham will become available for eastbound services. This was reported by Bahnoperator, the company providing railway traction on the European part of the journey. The service is a multimodal link, with a shipping link between the UK and Kaliningrad.

The service was launched for westbound traffic at the end of March. It is operated by Russian Railways RZD in cooperation with the JSC UTLC ERA. The goods transported are auto parts, industrial equipment parts, medical equipment and other commodities. The success of the service has been apparent, and it will yield even more benefits with the launch of an eastbound service.

The service is unique in that it reloads the cargo onto vessels from the Russian port of Kaliningrad, rather than a western European port. Services from China to the UK have been launched before, but in most cases, transhipment happens in the port of Rotterdam.

In recent years, alternative routes through the Russian enclave Kaliningrad have become more and more popular in the market. Compared with traditional routes, the Kaliningrad line is quite competitive in terms of capacity and transit time. The two main railway stations in the area can handle a total of 750,000 TEUs of cargo each year, and according to the current volume development, the handling capacity is more than sufficient.

More importantly, it only takes around 10 hours for goods to transit through Kaliningrad, and the time limit for customs clearance has dropped to about 2.5 hours in recent years.

The launch of an eastbound service generally means that the parties involved can count on more capacity on the railway line between Europe and China. In China, services that have an eastbound train are priotised with most platform companies, among which the one in Xi’an. This was explained by Xiao Zhang, Vice President of Xi’an International Inland Port Multimodal Transport Co. during RailFreight Live on 18 June 2021.

This has everything to do with the fact that eastbound services remain a less developed journey in comparison with westbound traffic. This imbalance results in a lack of containers or other equipment in China. Containers often need to be shipped back empty, which is a costly procedure. 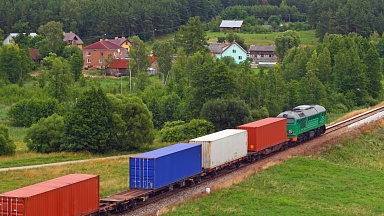 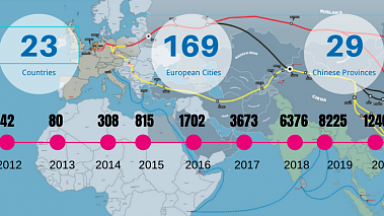 News
The 2021 Silk Road numbers are there: what do they tell us?
Source: Railfreight
Rail transportation Container shipping Belt and Road Initiative
Analytics on topic
Report 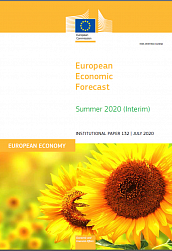 Report
European Economic Forecast (Summer 2020)
In a new European Economic Forecast, the European Commission expects a deeper recession and a slower recovery for the economy of the Union. However, the blow caused by the pandemic differs from country to country with some states and industries expected to recover faster due to internal factors.
Source: European Commission
Mechanical engineering Automotive engineering Industry EU COVID-19
Article
China’s rail shipments to Europe set records as demand surges for Chinese goods amid coronavirus