Air cargo continues its rollercoaster ride as the second wave of COVID-19 gathers momentum, according to the latest figures from WorldACD.

The market data specialist said that September 2020 marked the end of the first two ’COVID-19 quarters’ and that the month itself seemed to «bring some reason for optimism,» as the year-over-year (YoY) drop in kilograms worldwide was by far the lowest since April: −12.5% for September against −33% for April.

«Month-over-month (MoM), September showed a 7% increase, whilst September 2019 was more or less the same as August 2019. Even yields/charges per kilogram seemed to „stabilize“ around US$ 2.82 (still more than 60% higher YoY). In short: air cargo was in its best shape since April.»

WorldACD continued: «We have noted that quite a bit of the COVID-related equipment is marked as general cargo. With the ’second wave’ growing over the past months, this may well be one of the reasons why general cargo was up by 8% (MoM) in September, and other product categories by only 4%. Transport of flowers increased by 7% MoM, but other perishables, vulnerable goods and pharmaceuticals by around 2% only. Thus, general cargo’s share of the total business showed a MoM increase from 65.5% to 66.5%.»

The origin regions Africa, Europe and MESA (Middle East & South Asia) had an above average MoM growth in September: +11%, +10% and +8% respectively. Airline revenues increased by 6% MoM, due to a US$-yield drop of 1%, «remarkably evenly divided over all regions.»

First half of October

According to WorldACD’s provisional figures, the present month did not start well with weekly volumes through 18 October «marginally down, whilst yields/charges are trending upwards since last week. The Americas seem to look slightly better than other regions, both MoM and YoY.»

Highlighting a recent report by The New York Times that the economy in China «rebounds strongly,» citing the latest figures of China’s National Bureau of Statistics for Q3 2020, WorldACD said its figures do not yet show such a trend for air cargo ex-China.

«Even though China’s YoY volume decrease in Q3 was much smaller (-4%) than the world average (-16%), YoY China’s second quarter was better than its third. But the flaring up of COVID-19 in both Europe and the USA may well change things again, as yields/charges from China to Europe and (in particular) the USA, are on the rise again after the steep drop in June/July.»

WorldACD underlined that the period April-September 2020 has produced air cargo figures «unheard of» before COVID.

«The worldwide market decreased by 21% YoY in volume: the origins MESA, Africa and Europe suffered most (-37%, −30%, −28% respectively), and Asia Pacific least (-12%). Most areas suffered losses on all major trade lanes (i.e. region-to-region markets) in more or less equal measure. The exceptions were Asia Pacific and Central & South America (C&S Am). The former lost very little on the lanes to Europe and North America, whilst C&S Am only lost 7% on its lanes to the north.

Although on some of the smaller lanes, yields/charges did go up to levels between US$8 and US$9.5/kilo, on the larger lanes the average yield was nowhere near the incidental yields reported by some over the past months: Asia Pacific noted an average of US$ 4.89 to Europe and of €5.91 to North America.

«The differences in the dwindling demand for goods carried by air, is well illustrated when looking at the YoY changes in freight carried to each destination region: Europe lost 16%, but Africa 31%. The other destination areas showed losses between 21% and 26%,» WorldACD observed.

Airlines grouped by origin, «suffered in equal measure when it comes to volume lost,» but in very different ways when looking at their revenues: airlines from the Americas added 24% to their revenues, but those from MESA and Asia Pacific increased theirs by 60% and 52% respectively.

Drawing attention to recent statements that smaller forwarders have done better than larger ones, WorldACD said that this "appears to be partly true.... The forwarders outside the world’s Top-30 indeed increased their worldwide share, from 54% to 55%, but they ‘bought’ that increase by accepting charges that were 85% higher YoY, whilst the Top-30 saw their charges increase by 76%.

"In the largest market (ex-Asia Pacific) the Top-30 paid average charges that were 6% lower than those paid by the smaller forwarders (last year they were 12% higher). This is the more telling when taking into account that the Top-30 do much more in the markets to North America, where charges are highest.

Among the Top-30, the forwarders with headquarters in Asia Pacific and North America improved their volume share. "Remarkably, the Asia Pacific forwarders managed to do so in spite of paying average charges 8% below the average for the total elite group WorldACD added.

The chart below shows the correlation between volume growth and increased charges for the world’s Top-30 forwarders. 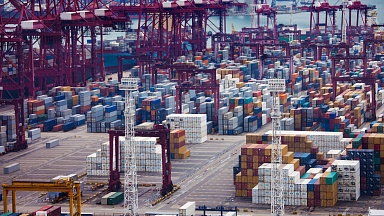 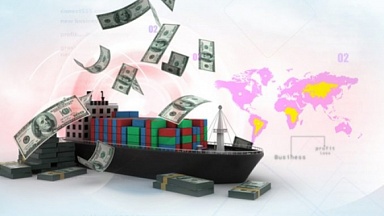 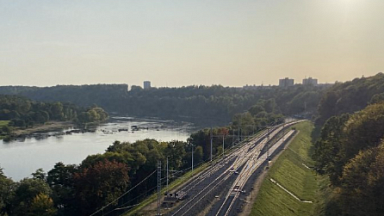