Role of Poland on European railway network can’t be missed

The importance of Poland has once again been confirmed. A representative of the Polish infrastructure manager, PKP PLK, has been appointed as the manager of the Trans-European Railway project. This UNECE-led project is a sub-regional cooperation among Central, Eastern and South-Eastern European countries. Poland is at the crossroads of all.

The selected manager is the female Małgorzata Kopczyńska. She was elected unanimously beginning this month by the committee of the Trans-European Railway (TER) project. The Polish infrastructure manager PKP PLK is considered an important party for regional development, as the Polish railway network is facing several upgrades. These upgrades are not only to benefit Poland, but the region at large.

The TER project was established in 1990 to improve the quality of rail transport in the Central European region. One of the aims is to identify so-called bottlenecks and missing connections in the European transport network. Among other things, an analysis of transport volumes and technical parameters of the lines is being carried out.

The role of Poland

The role of Poland in this region cannot be missed. Poland plays an important role as a transit country for traffic between the Baltic, Black and Mediterranean Sea (north-south) as well as traffic on the New Silk Road (east-west).

In response to the appointment, the Polish ministry of infrastructure said that participation in the TER project means a real opportunity to secure Polish interests during the formation of international agreements and the establishment of transport routes.

The role of Poland in the region is also the main reason why we strike down every year in Poland with the RailFreight Summit. This year, this event takes place in Lodz, on 1 & September. The infrastructural developments in Poland, but also on the network surrounding Poland, including the New Silk Road, are topics on the programme. Registration for this event is still open. 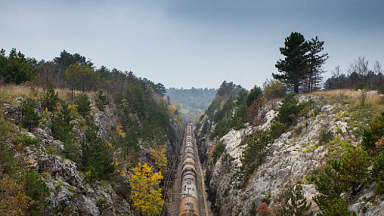 Report
Transport and environment report 2020: Train or plane?
Traveling by plane, train or automobile: the most environmentally sound choice may not always be clear. The report assesses the value of travel by train and plane. Rail travel is the best and most sensible mode of travel, apart from walking or cycling.
Source: European Environment Agency (EEA)
Transport logistics Rail transportation Air transportation
Article
Can the New Silk Road Compete with the Maritime Silk Road?
What are the pros and cons of the rail routes compared to the sea?
Source:
Sea transportation Belt and Road Initiative Transport corridors China EU