Thanks!
We will contact you.
EnRu中文
Rotterdam and Singapore ‘face highest risk of post-Suez congestion’ 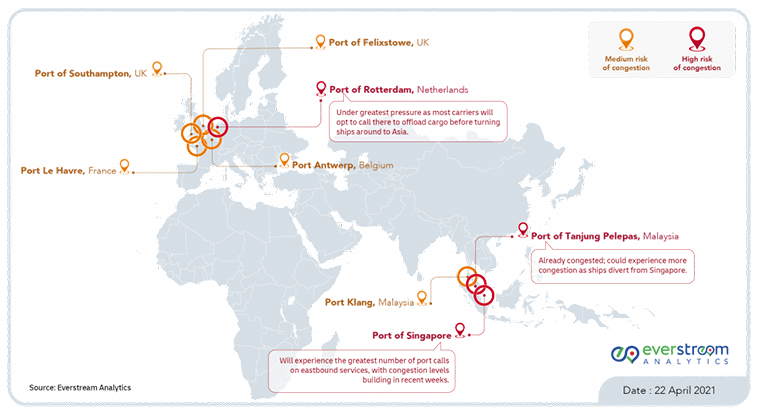 Container Terminals in Rotterdam are likely to remain under the greatest pressure and the highest risk of congestion in the aftermath of last month’s Suez Canal blockage — as ocean carriers consider offloading cargo at major hub ports, skipping subsequent port calls, and turning ships around early to return to Asian ports, according to an impact report published today by Everstream Analytics.

It said this strategy allows the container lines to move faster to reposition empty containers which have been held at European ports for longer than usual due to the Ever Given’s grounding and are therefore unavailable in Asia, thus benefiting from spot rates which are almost four times higher on the fronthaul from China to Europe than on the backhaul.

The report noted that since last week, the first vessels stuck in the Suez Canal have been arriving in European and southeast-Asian container ports, which have been quieter than usual in the first half of April due to the canal blockage.

«In Europe, the Port of Rotterdam was expected to have the greater number of vessel calls from ships arriving from the Suez Canal,» the report noted. «Although contingency measures, such as emptying yards to make space for new containers, have helped terminal operators to keep operations running, berth line-ups of vessels have started to become congested and are expected to remain so until the end of April as more vessels continue to call at the port.»

The report continued: «Should congestion issues in Rotterdam worsen, carriers could opt to unload cargo at nearby ports such as Antwerp, Felixstowe, or Le Havre. This may cause knock-on congestion effects at these gateways due to ad-hoc vessel arrivals and leave shippers with cargo at the wrong ports until ships arrive a week later to carry the cargo to destination ports.»

It noted that container terminals in Antwerp had already faced congestion issues prior to the Ever Given’s grounding, prompting container lines to push more volumes to terminals in Le Havre.

Turning to Asia, the report highlighted that the Port of Singapore, which is expected to receive the largest number of vessels calls on eastbound services, has also faced an uptick in vessel berthing times over the past 10 days — with vessels now spending 51 hours on average outside the port, compared to 42 hours two weeks ago.

«Should congestion issues worsen in Singapore, carriers could opt to discharge cargo at alternative hubs nearby, increasing the risk of congestion at Port Klang or Tanjung Pelepas. The latter has already been facing average berthing delays of more than two days in the past weeks.»

Besides the increased risk of delays for import cargo into Europe and Asia, the Suez Canal closure will also have an impact on the availability of container equipment, notably 40-foot containers, at export hubs in China and Korea, which will likely decline from mid-April into the month of May, the report observed.

Among the ports most affected by the shortage are likely to be Shanghai, Ningbo, Qingdao, and Busan, which could lead to another spot rate increase on transpacific and Asia-North Europe lanes, it highlighted.

The report concluded: "Maersk Line, the largest container line in the world, has already warned that it expects a temporary loss of up to 30% of its cargo capacity between Asia and Europe in the second quarter of the year due to the Suez Canal blockage.

"However, as most container lines have opted to turn ships around faster than anticipated from Europe to Asia instead of waiting at potentially congested terminals, an earlier recovery of schedules appears increasingly likely, and capacity and equipment issues on the Asia-North Europe trade route caused by the Suez Canal blockage should decrease by the end of May.