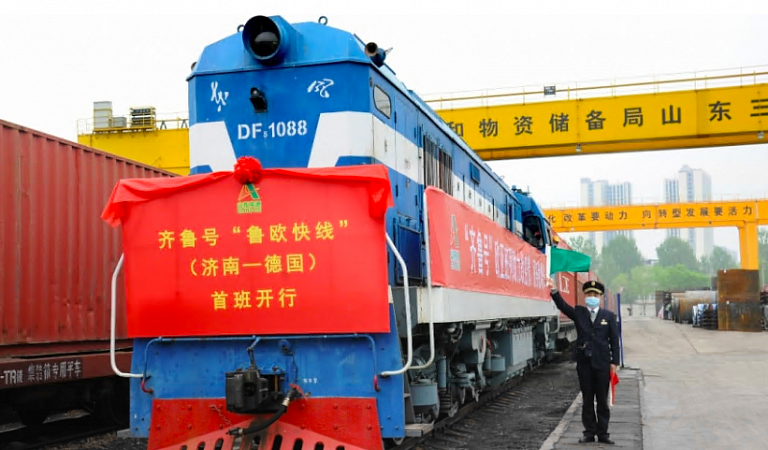 The new Shandong-Europe Express train from Jinan has arrived in Hamburg’s Billwerder Terminal, delivering valuable and time-sensitive cargo from China. «The Shandong Express arrived on 30 April in Hamburg in the midst of the coronavirus crisis. It is a powerful sign in trying times for all of us», Chinese Consul General in Germany DU Xiaohui emphasised.

On April 10, the «Shandong-Europe Express» set out from Jinan, the capital of Shandong Province. The train, operated by the Shandong Hi-Speed Group as part of their Qilu Europe-Asia freight traffic service, was loaded with 41 40-foot containers filled with wind turbine parts, LEDs, tools, and medical supplies. Currently, the train only operates from China to Europe. Carriage in the other direction is not being offered at this time. The next departures from Jinan are scheduled for May 16 and 30.
Shandong province

The Province of Shandong is located on the east coast of China, with the Shandong peninsula forming the southern coast of the Bohai Gulf. According to its gross domestic product (GDP), Shandong is economically the third most important province of China. Industries in the areas of electronics, machinery, chemicals, textiles, and food processing are located there. The Port of Qingdao provides the province with ocean connections to European seaports.

The train to Hamburg is not the first departure from the province to Europe. In September last year, the first Chinese container train departed from the city of Jinan to to the Novi Beograd (New Belgrade) railway station in Belgrade. A month earlier, a new service was launched from the city of Yantai to Duisburg.

Hamburg on the New Silk Road

Hamburg hosts a extensive network of train connections to and from China. Last year, 204 train connections per week were marketed and run between the Port of Hamburg and 20 destinations in China. Beijing, Changchun, Changsha, Chengdu, Chonqing, Dalina, Ganzhou, Harbin, Hefei, Qingdao, Shenyang, Shenzhen, Shilong, Suzhou, Tianjin, Wuhan, Yiamen, Xi’an, Yiwu, and Zhengzhou were regularly linked with Hamburg via the New Silk Road. In 2019, around 100,000 standard containers (TEU) were transported by rail.

Hamburg’s Senator for Economics, Michael Westhagemann added: «I’m very pleased to see that we are able to improve the connections between Hamburg and China even further. Landside connections, particularly transport by rail, provide the Port of Hamburg with great opportunities and are one of its strengths: 12 per cent of German rail cargo transport arrives at or departs from the Port of Hamburg. This puts us in an excellent starting position to make good use of this strength in a sustainable way on the Silk Road in the future.»

The role of rail for large ports as that of Hamburg has often been discussed. For Hamburg, the New Silk Road connections are an important mode of transport that «closes the gap between airplanes and ships». The Port of Hamburg has a throughput of about 2.6 million TEU of seaborne containers for China annually. Almost every third container handled on the quays there is coming from or headed to China.

«There are three modes of transport to choose from when shipping goods to or from China: ships, trains, or airplanes. Costs and time are important factors in this decision. Airfreight is obviously the fastest. It can move import and export cargo between Asia and Europe in one to two days. However, it is also very costly. Ocean shipping between the continents is very inexpensive, but it can take up to eight weeks for the goods to reach their destination. The third possibility, shipping by rail, closes the gap between airplanes and ships. Trains take two to three weeks for the route between Europe and Asia. In terms of costs, rail cargo is also in between air and sea transport», the port said. 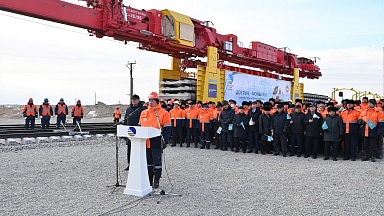 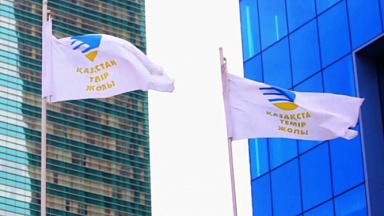 News
‘Look for other routes, Kazakhstan at risk of sanctions too’
Source: Railfreight
Rail transportation Kazakhstan